Offerings to Ornament the Sky 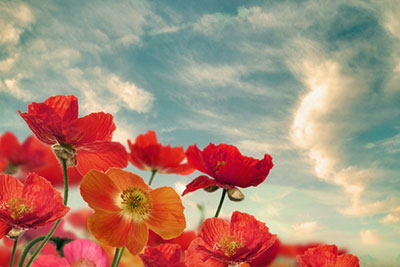 “I embellish the heavenly sky with these flowers.” This sentence refers to a story of a bodhisattva in one of Shakyamuni Buddha’s past lives that appears in the Chinese Vinaya text.

When Dipamkara Buddha was in this world, there was a bodhisattva (the future Shakyamuni Buddha) who lived as a hermit. When he heard Dipamkara Buddha was coming, he wanted to offer flowers. He bought five stalks of lotus flower, spending all the money he had. When he threw the flowers to the Buddha as an offering, they stayed in the sky and were transformed into a flower canopy which covered the Buddha. The canopy continued to cover the Buddha wherever he went.

In Shobogenzo Hotsumujoshin (Arousing Unsurpassable Mind), Dogen refers to this offering of the five stalks of lotus flowers:

Taking it up in this way, we sit a buddha and we make a buddha; this is called arousing bodhi-mind. In general, as the causes and conditions of arousing bodhi-mind, we don’t take it up from somewhere else, rather we take up bodhi-mind itself to arouse this mind. Taking up bodhi-mind means that we hold a single stalk of grass and make it into a Buddha; we hold the rootless tree and making it into a sutra. We offer a handful of sand to a buddha and offer a bowl of drink to a buddha. We offer one ball of food to living beings and offer five stalks of [lotus] flowers to a tathagata.1

This mind (kokoro) refers to bodhi-mind. As bodhisattvas — people who have aroused bodhi-mind — we exchange all of our personal possessions for the lotus (dharma) flowers and throw them into the sky (emptiness) to offer them to the Buddha. Then our offerings stay in the sky as ornaments of the world of Buddha dharma. They don’t fall down to the earth, the ground of human desire.

While Ryokan was begging (takuhatsu) in a spring day, some children in the village wanted to play with him as usual. Ryokan started to pick violets and dandelions in the spring field with the children. He put the flowers in his begging bowl and told the children, “Let’s offer these pretty flowers to the buddhas.

Possibly on the same occasion, Ryokan composed another waka,

Even though they have no market value, violets and dandelions are pretty flowers in the field. Ryokan and the children picked them and put them in the begging bowl and made them offerings to the buddhas. The begging bowl is made receive offerings from people, but Ryokan used it to make offering to the buddhas. His practice of begging and playing with children were also his offering.

> Other Waka by Dōgen

This site uses Akismet to reduce spam. Learn how your comment data is processed.

Thank you! The Dogen Institute is part of the Sanshin Zen Community. Donations through this site will be applied to Dogen Institute activities. Your bank statement will read: "PAYPAL*SANSHIN ZEN."